The following table details the speech names, lengths, and the side responsible for giving the speech. 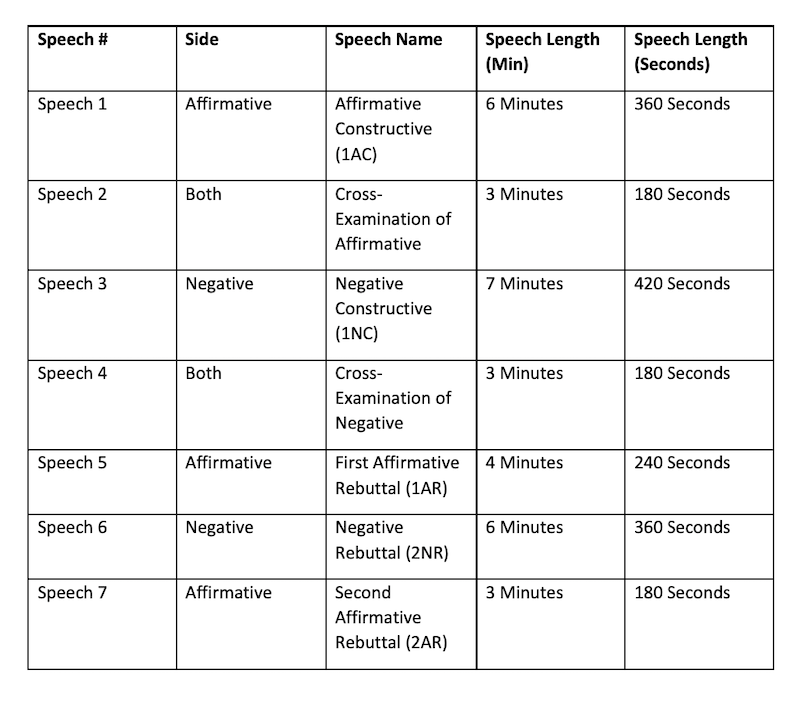 This is the first speech of the debate and is known as the “AC” or “1AC.”

Here, the Affirmative (Aff) will present their prewritten case for 6 minutes. They will have a “Framework” (setting up a philosophical way to view the round) and “Contentions” (arguments about the topic that connect back to their framework).

There are two cross-examinations in a debate.

Following the Neg’s cross-examination, the Neg gives their First Negative Constructive (also known as the “NC” or “1NC.” The speech is 7 minutes.

Here’s the Neg has two jobs – presenting their own case and answering the Aff’s case. For their own case, in a traditional round the Neg will present their own Framework and their own Contention(s) before moving onto the Aff’s case. In a more “circuit” round, however, the Neg might read multiple “off-case” positions, such as Kritiks, Counterplans, Disads, and Procedurals. They are then reading multiple cases, in essence.

In dealing with the Aff’s case, the Neg will want to have a combination of offense and defense, seeking to defeat the Aff’s contentions. They also might contest the Aff’s Framework, if the two teams have read different Framework arguments.

The First Affirmative Rebuttal (1AR) is 4 minutes long. Since it has to cover the long 1NC, it is the hardest speech in the debate.

Given the short speech, the Aff has to be efficient. An argument not addressed by the 1AR is known as “dropped” and cannot be brought back in the Second Affirmative Rebuttal.

This is the Second Negative Rebuttal (“2NR” or “NR). It is 6 minutes long.

Here, the Neg needs to defeat the 1AR, rebuild their own positions, and also crystallize the round for the judge (it is their final speech).

Given how much the Neg needs to accomplish, the Neg will often “collapse” down to one core position and spend time explaining a couple of central arguments. They will also consolidate down to a couple of core attacks on the Aff’s case.

The 2NR is not allowed to make new arguments – if the argument was not in the 1NC, it cannot be made in the 2NR, although there is leeway in answering new 1AR arguments.

The Second Affirmative Rebuttal, or 2AR, is 3 minutes long. It is the final speech of the debate.

Here, the 2AR must reply to the 2NR and summarize the round.

Judges typically apply a strict standard of new-ness to the 2AR – arguments not in the 1AR are strictly forbidden in the 2AR, since the Neg does not get a 3NR to reply.

The Aff will give “voting issues” often (reasons why the Aff wins) and make sure to rebuild their case and answer the 2NR.